In 2016 after many years heading the Emerald PAVE Festival’s Photography Competition and Exhibition, and receiving entries from many local and nearby photographers, Paul Bianco saw a need to start a camera club in Emerald, one that was open to all ages. 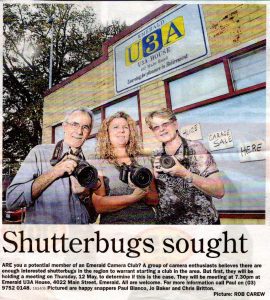 A story was run in the Ranges Trader Mail, with a photo starring Paul, Jo Baker and Chris Britton, inviting members of the public to an information evening.  More than thirty people attended, resulting in twenty-one of them signing up as inaugural members of the Hills Photographic Society.  The name HPS was chosen ahead of Emerald Camera Club as it was felt it was more encompassing for the area. The club is affiliated with the Victorian Association of Photographic Societies, VAPS, which offers support and a list of judges for our competition, if required.

The club first met in the old Emerald U3A building until the end of 2018. As that building had to be  demolished in 2019 to make way for the Hills Hub, HPS moved to the St Joseph Catholic Church hall. The church committee was very obliging.  As with many organisations, HPS continued to meet via Zoom during the 2020 Covid-19 lockdown.  Both modified workshops and competition night were conducted.  In February 2021, with an easing of Covid restrictions  the club moved into the new Hills Hub with state-of-the-art  space and facilities.

Since our inauguration many members have taken on executive roles, including David Jenkins as President, Kathie Thomas and Pauline Bunker as VP, Kris Ash, Allan Pan, Henk Van den Berg and Daine Alcorn as Secretary,  Allan Pan as Treasurer, and John Weeks, Jens Rumoller and Steve Wickenton as members on the committee.

Although our membership reached a peak of 25 during 2018, it dropped back during 2019/2020 due to COVID and the inability to meet onsite but is again on the rise with the current membership as at March 2021 standing at 19.

Are you a shutterbug?

Then consider joining our club - we'd love to meet you!

Listen to our radio 3MDR interview